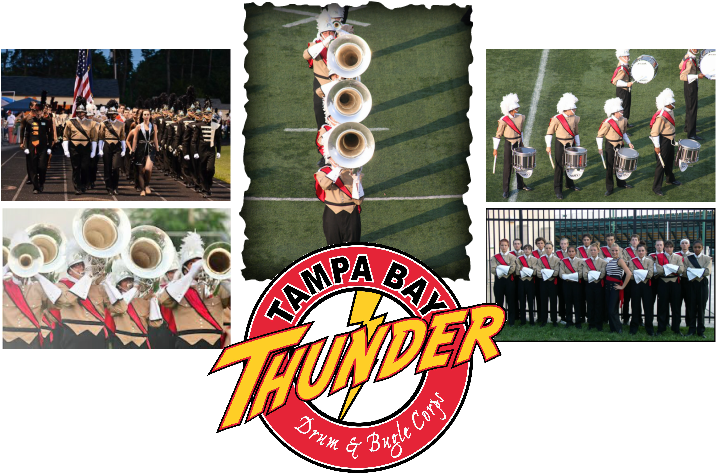 Formed in the Fall of 1999, Tampa Bay Thunder competed in DCI Div 2/3 during the summers of 2000 & 2001. Thunder's inaugural season, 2000, the corps competed in DCI Div 3 (now Open Class) and placed 14th place. 2001 saw a jump from Div 3 to Div 2, with the corps nearly doubling in size. Thunder placed 11th in 2001. In 2002, Thunder had a record sized audition camp, and began preparing to compete in Div 2 for the summer of 2002. In the spring of 2002, Thunder merged into the Kiwanis Kavaliers Drum & Bugle corps, based out of Kitchener, Ontario. The merger created the largest corps in Kavaliers history.

In the early spring of 2010, a group of Thunder alumni and other drum corps enthusiasts decided to bring back Thunder but as an all-age corps to compete in the Drum Corps Associates (DCA) League. Thunder came back to life in December 2010 and went on to compete in DCA Open class in 2011 ending the season in Rochester, NY by being a DCA Finalist and finishing 10th place overall.

The Tampa Bay Thunder All- Aged Drum and Bugle Corps has been created to help fill the void for those that can still compete at a high level but can't afford to commit the entire summer or spend thousands of dollars with a full touring corps.